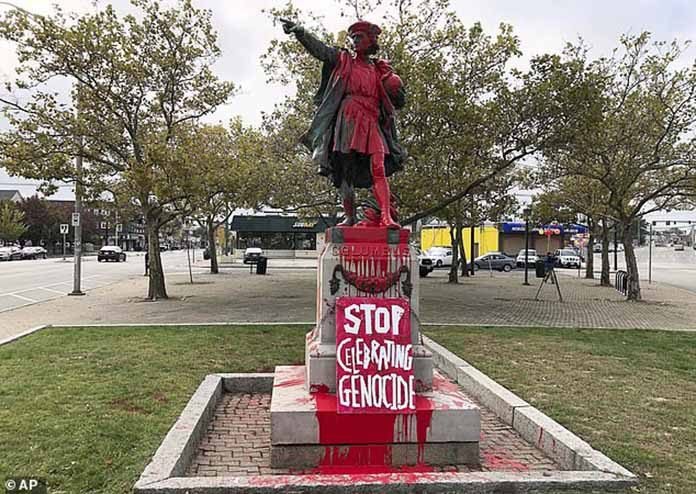 A statue in Rhode Island of Christopher Columbus has been splashed by vandals with red paint on the national holiday that celebrates the explorer’s arrival and discovery of the Americas.

A sign in red paint was also left at the statue’s site in Providence that reads ‘stop celebrating genocide’. The vandalism occurred amidst calls for replacing the national holiday with Indigenous Peoples’ Day.

The Providence Journal reported that Emily Crowell, a spokeswoman for Mayor Jorge Elorza has stated that the statue which was based on the famous sculpture by Frédéric Auguste Bartholdi, the French artist who designed the Statue of Liberty, shall be cleaned while the police begin their investigations into the matter.

This is the fourth time since 2010 that the statue has been vandalized in Providence. It is done in a similar fashion to targeted vandalism of various other statues of the Italian explorer in other cities.

The 15th century explorer’s statue was last covered in red paint in New York and Chicago in 2017. It was the same year when the Providence statue was also last defaced.

The Brown University, at the time, had voted to rename the ‘Fall Weekend’ at the Ivy League School to ‘Indigenous Peoples’ Day.

After Chauvin verdict, BLM ‘not gonna let these pigs in these...

Massive Voter Fraud Found in Texas is ‘A Threat to Democracy’