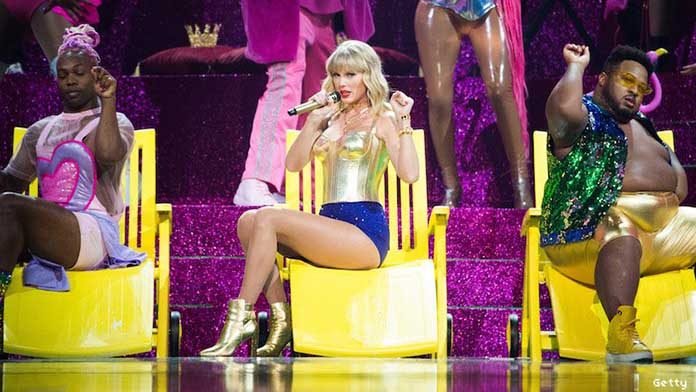 LATimes. Taylor Swift was in the spotlight at the 2019 MTV Video Music Awards — and she used part of her screentime to remind the Trump a dministration that she’s waiting on a response to a petition.

While accepting the Video of the Year award, the pop star said the honor signaled fans’ support of her message in “You Need to Calm Down.” The single has been received as an LGBTQ ally anthem for its emphasis on self-love, community support and acceptance as themes and celebrity cameos, including the Fab Five of “Queer Eye,” Laverne Cox and Ellen DeGeneres.

The video for the single, which also took home the Video for Good award, includes an ask for viewers to sign Swift’s petition to the U.S. Senate in support of the Equality Act to demand that “on a national level, our laws truly treat all of our citizens equally.”

When mentioning the White House, Swift lifted her arm and tapped her wrist as though she were looking at a watch and waiting for something overdue.

The White House responded Tuesday when spokesman Judd Deere reiterated the administration’s stance that it rejects discrimination but doesn’t support the legislation.

“The Trump administration absolutely opposes discrimination of any kind and supports the equal treatment of all; however, the House-passed bill in its current form is filled with poison pills that threaten to undermine parental and conscience rights,” Deere said, according to a CNN report.

Tenn. suit that would force schools to have gender-neutral bathrooms to...