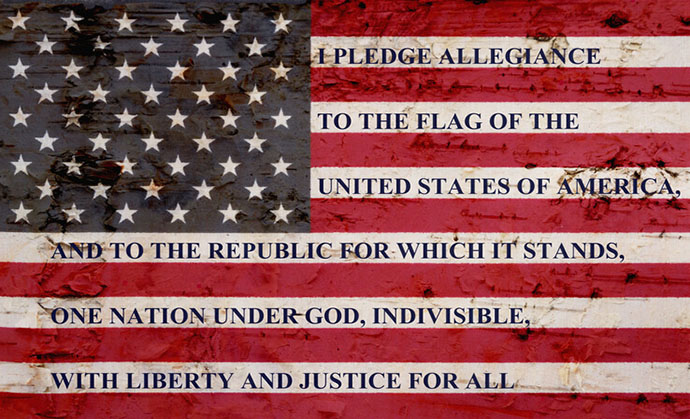 A supervisor in Dane County, Wis. thinks the Pledge of Allegiance is “divisive.”

The same supervisor thinks that banning it from county board meetings, to satisfy her own snowflake-y whims, would not be.

To the liberal, that is fairness: not necessarily that they get something — only that others have something taken away. By them.

The official, named Heidi Wegleitner, is proposing removing the pledge as well as the word “prayer” from the board rules as a biannual redraft is performed.

“It just doesn’t feel like it’s appropriate for us to be doing, when in a pluralistic society we want to be inclusive and representative,” said Wegleitner. “At the end of the day, I think it’s divisive.”

And limiting and controlling the speech of others is not?

Newly elected supervisors would have the final say over Wegleitner’s new restrictions following the April 5 election.

Apparently willing to sink some time and effort into her miniature power play, Wegleitner said she looked into which area governmental bodies recite the pledge at their meetings. She reported finding inconsistencies about whether it was done, the Wisconsin State Journal reported, as picked up by U.S. News, and seems to believe this tips the matter in her favor.

Municipalities that don’t have the pledge on their agendas include Madison and Waunakee, she said. Fitchburg, Sun Prairie, and Verona do include it, according to those cities’ agendas.

Important supervisory work is being done, all in the name of removing someone’s freedom to pray. Could she simply not pray, when the agenda item comes up? Why must everyone stop to suit her sensibilities?

Board member Tim Rockwel said that the option to pray at the start of a meeting makes the board more inclusive and diverse. Noting that more than 45 percent of Dane County is religious, he said that the county’s religious diversity should be “celebrated and not squashed.”

Ilhan Omar files for divorce amid rumors of an affair