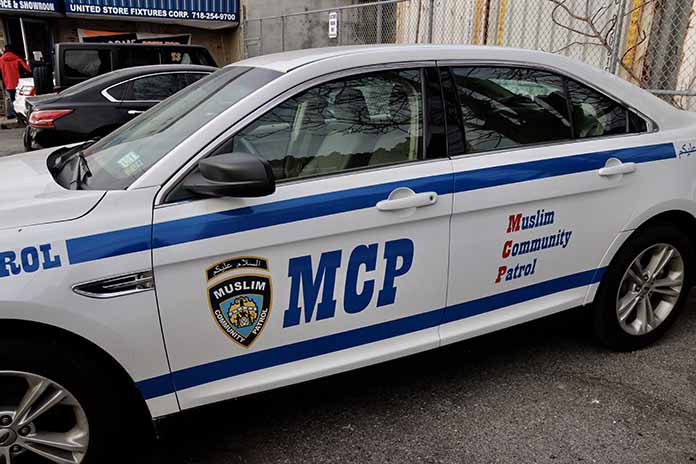 A tense meeting between Brooklyn, New York’s Muslim Community Patrol & Services group and a faction of the Bloods gang took place Dec. 21, with the goal of resolving an ongoing dispute and de-escalating an increasingly dangerous situation.

A feud between the groups began on the evening of Dec. 10 when an MCP&S “patrolman” threw a teenage boy against a fence for “disrespecting” a Muslim woman at the Masjid Taqwa in Brooklyn. A few days later a Muslim man was severely beaten outside the mosque, home to the radical Islamic cleric Siraj Wahhaj, in what was understood to be a retaliatory attack.

For the past week, MCP&S had been trying to meet with the Bloods to resolve the dispute.

According to inside sources, Ali Karim of MCP&S visited the home of the father of the teen who was thrown against the mosque’s fence by the MCP&S member.

Four Muslim bodyguards accompanied Karim to the meeting at in the Brooklyn area on Saturday evening, while the Bloods had seven members in attendance.  Two of the Bloods were reportedly armed.

Ali Karim is second in command of MCP&S and is responsible for hiring patrolmen, supervising the group’s police-cruiser-style vehicles and assigning duties to “officers.” Karim does not hold an official title with the nonprofit organization, which has repeatedly been accused of trying to enforce Sharia law in the city.

Initially, the Bloods had requested that MCP&S “turn over” the patrolman who roughed up the teenager, or at least give them his home address.

This was unacceptable to Ali Karim, who countered that MCP&S had already fired the offending patrolman and that, in the future, MCP&S would be keeping its patrol cars away from the Bloods’ territory near Bed-Stuy.

The Bloods reportedly accepted the counter-offer and promised to “keep their hands off” Muslims at the Masjid Taqwa and at another nearby mosque, Masjid Khalifa.

Though the counter-offer fell far short of the Bloods’ initial demands, a mosque member said: “The Bloods are getting what they want, to keep the cars out of their neighborhood. So they get the victory, for now.”

The agreement still has to be approved by Siraj Wahhaj, the imam of Masjid Taqwa, which is largely seen as controlling MCP&S operations.

“He’ll probably agree,” said the source about the controversial Muslim cleric.  “For Imam Wahhaj to give that boy up to the Bloods would be a great injustice towards Islam.  Muslim blood is not to be shed by the Kaffir (non-Muslims). I think he’ll agree and tell the patrol cars not to go there. There’s no benefit to the Muslims. There’s not a mosque over there.”

See our special report on the “Secret Agenda of Muslim Community Patrol Cars” and watch our video below.