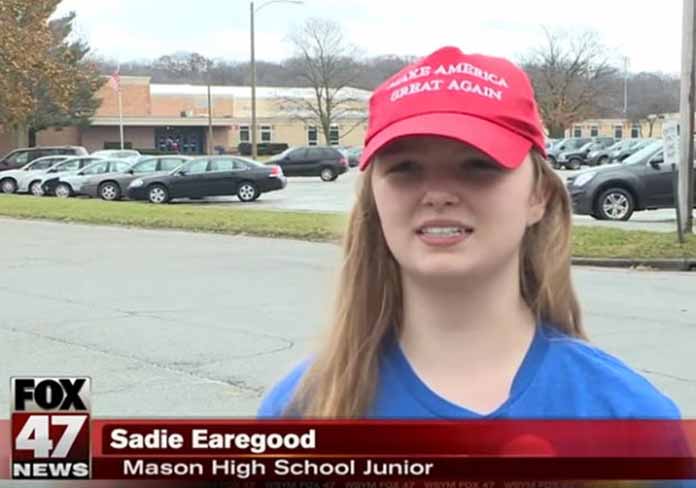 A teacher apparently resentful over the presidency of Donald Trump lost control of his emotions earlier this month, one in a growing string of such incidents of anger at the Republican president boiling over.

A student at Mason High School in Mason, Mich. went to the police saying a teacher attacked her at school because she was wearing a “Women for Trump” button, WILX 10 reported.

Sadie Earegood told NEWS 10 that the teacher involved was Paul Kato, the media technology teacher at the school. Students say Kato has not been in school since the alleged incident on Dec. 5. Mason Schools has not confirmed that information.

Earegood, 16 and a junior at the school, said Kato started off by saying he didn’t like the button she had on.

“I was just really shocked that a teacher would especially do that,” she said. “He’s talking about the ‘Women for Trump’ pin and I said, ‘that’s fine you don’t have to like it, we can have our opinions.'”

A struggle followed, Earegood said, in which the teacher tried to take the pin off her.

“He grabbed it and I pulled, I tried to push his hand away and he grabbed my shoulder,” she said. “(He) just kind of put his hand there, and then he started pulling more and more and I just started backing up.”

She said the teacher then put the pin upside down on his own shirt and said that it belonged that way.

Mason Superintendent Ronald Drzewicki released a statement saying, “Once we have a complete understanding of the situation, we will take appropriate action.”

The Earegoods filed a report with the police.

“I made a criminal assault and larceny report against the teacher,” said Capi Earegood, Sadie’s mother. “He had no right to put his hands on my child over a pin or anything else. The first amendment gives everyone the right to express their freedom of speech. No one should get that upset about someone wearing a political pin.”

Mason Police Chief Don Hanson confirmed his department is looking into a report of an alleged assault on Dec. 5. The Mason School District has not confirmed with us that the allegations against Kato are true