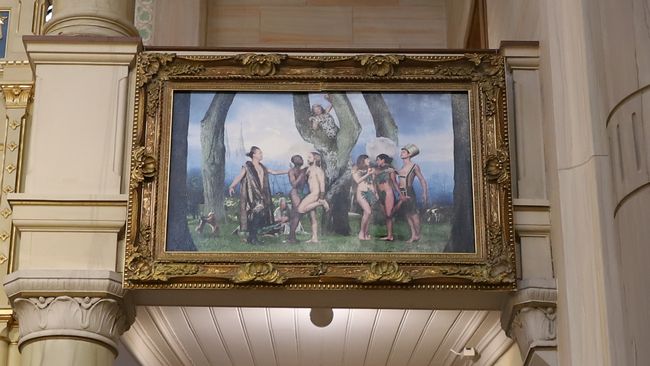 A diocese in Sweden has said it will remove a gay-themed altarpiece from a church in Malmo, but not because it is tasteless, twisted, blasphemous, ugly or just plain silly.

The Lutheran Church of Sweden fears the artwork — which depicts two Adams and two Eves and a transgender woman dressed as a serpent — will be offensive to transsexuals.

Yes, it is not politically correct enough.

Created by Elisabeth Ohlson Wallin, the artwork was given to Saint Paul Church in Malmo and placed to the right of the main altarpiece on the first Sunday of Advent, Dec. 1.

According to Dailymail.com, church officials said they feared the painting could be interpreted as showing a transgender person as the Devil, since a snake traditionally symbolizes evil in Christianity. “The fact that there are two homosexual couples in the artwork is completely uncontroversial,” read a statement from the diocese.

Wallin, 58, expressed disappointment that the mural had been taken from the church.

She said her goal is to create “Christian” artwork with which LGBTQ people can identify.

Ms. Wallin made headlines 20 years ago for her depiction of a stiletto-wearing Jesus surrounded by 12 transvestite apostles.