Sometimes it can be painful to look at a photograph.

I’m looking at an unthinkable photo taken outside of the United States Embassy in Seoul, Korea, where our American flag stood sandwiched between two other flags, a Black Lives Matter and an LGTBQ flag!

That 2020 display represented an American disgrace and an international humiliation until the US State Department in June of 2020 ordered the flags taken down. 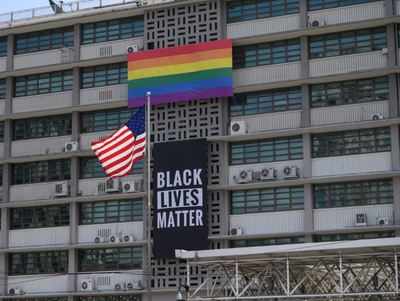 But that was the State Department under the direction of President Donald Trump and his Secretary of State, Mike Pompeo.

Now Joe Biden and his Secretary of State Antony Bliken are in charge and the rules, predictably, have changed.

In April of this year, Blinken gave authorization for American embassies to fly the LGBTQ flag. Then in May, he authorized US diplomatic outposts worldwide to fly the Black Lives Matter flag.

For these reasons, NY Congresswoman, Nicole Malliotakis, has introduced a bill called the “Stars and Stripes Act of 2021.”

If passed, it will BAN US Embassies from flying or displaying political activist flags, including Black Lives Matter and the LGBTQ flags.

Astoundingly, Secretary Blinken said these flags are necessary because it shows the “strength of our own diversity.”

Hogwash and a lie! Here’s the truth:

The Biden Administration wants these flags flown to promote the Marxist and homosexual agenda of the Black Lives Matter and LGBTQ movement!

The White House wants to tell the world that our soldiers are ready to fight and die for Marxism and pride in being gay.

America is NOT a Marxist country and America is not a gay, lesbian, bisexual or transgender nation.

Just because these subversive groups live in the United States, they don’t define who we are!

Our American flag stands for freedom, liberty, democracy, civil rights. It carries a message that America is One Nation Under God.

The Pledge of Allegiance promotes these ideals to all Americans. We can only hope it’s a pledge Biden and his White House Bimbos have taken.

We DO know it’s a pledge that our military soldiers have taken and one that all American patriots continue to celebrate and honor.

We do NOT pledge ourselves to Marxism or Queerism.

To fly those flags next to Old Glory is nothing but a liberal attempt to reinvent, transform and recast – and disgrace! — our American flag.

Rep. Malliotakis said it rightly: “It is absolutely ridiculous that legislation is needed to correct this issue.”

She is joined by House GOP Conference Chair Elise Stefanik. She said the American flag should never fly next to “the flag of a political organization founded by Marxists.”

The goal of Black Lives Matter is clear. They tell us their plan in proposed legislation called “The BREATHE Act.”

They want to abolish federal prisons, abolish the police, give illegal immigrants the right to vote, shut down juvenile detention centers, and give “universal income to all” (socialism!)

And they will riot, destroy, burn and savage any person or business that stands in their way.

The history of the LGBTQ movement is just as bad.

They have destroyed the sanctity of marriage, pressured kids into changing their God-given birth gender, literally savaged the Boys Scouts of America with sexual abuse cases, and are now trying to eradicate female sports with transgender athletes.

These flags DO NOT REPRESENT the vast majority of the American people.

They represent a tiny band of lunatic anarchists.

Their ONLY goal is to tear down America’s foundations, biblical values, traditions and erase all of America’s hard-fought freedoms — paid for with the blood of brave soldiers!

We need to fight back! And supporting the “Stars and Stripes Act of 2021” should be an action each of us should take.

Adding the BLM and LGBTQ flags to our embassies is to tell nations around the world that our American flag is flawed, broken, discriminatory and outdated.

By now, we should all be getting fed up with being told our American flag is steeped in racism, discrimination, hatred, bigotry and injustice.

If America is such a racist nation, how did we ever elect – for two terms! — America’s first-ever African-American president earlier this century?

If America is such a discriminatory country, how have we managed to elect a record number of gay, lesbian and transgender lawmakers into political office?

Rightly or wrongly, this was all done under the freedoms so eloquently represented in our Stars and Stripes. We didn’t do any of it under the flags of BLM or LGBTQ!

We cannot allow these flags to HIJACK our country’s identity.

Rep. Michael Guest (R-MS) is also a co-sponsor of the Stars and Stripes Act. He said, “Our country’s resources should be used to highlight our unity, not our political divisions.”

This nonsense needs to be stopped soon. Otherwise, our embassies will be flying the flags of every ridiculous, looney and kooky idea the liberals come up with.

Will the anarchist group Antifa eventually be allowed to fly their flag on US embassy poles? Nothing can be dismissed as laughable nowadays.

Soon, the American flag itself may be gone!

Did you read what Grammy-award-winning singer Macy Grace stated in a major publication, which later became national news?

She said the American flag “no longer represents democracy and freedom” and that” It’s time for a new flag.”

This is where the liberals are taking us. They don’t want anything that honors God, country, freedom, democracy or traditional values.

That’s why we constantly see BLM and LGBTQ activists setting fire to our American flag during their violent demonstrations.

If they want to burn our Stars and Stripes, why should we reward them by allowing their flags on the same government poles as the American flag?

Call, write or email your congressional representative and let them know you want the “Stars and Stripes Act of 2021” passed into law.

The LGBTQ and BLM movement may be tiny. Still, they have mighty friends inside Congress, the media, universities, Hollywood and major corporations.

But on our side, we have the best resource of all! The American People!