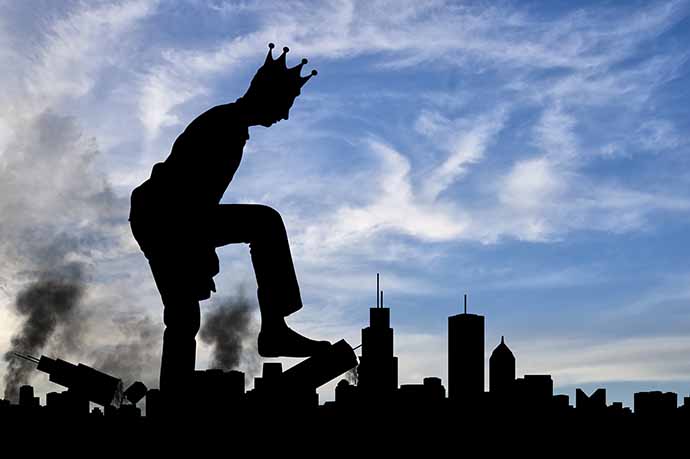 They are doing it, and the further they take the faster they must go and the more incapable they become of turning it around.

Agencies once assembled to protect Americans are now being used to bully them, harass them and hunt them down.

The English language is being twisted and perverted into something no longer useful as a tool of communication or description.

Virtually every word out of their mouths is now a lie, as their squealing media mouthpieces tell us that the rules must be changed so that no one can ever change the rules again.

Our one single crowning power, to vote, is about to be perverted as well into an empty ritual, as meaningless as it is in China, Iran, North Korea, Venezuela. Like it was in Soviet Russia or Saddam’s Iraq. We are told again and again and in every way that this is the will of the majority of us — to willingly overturn our only real means to peacefully transfer power.

A horrible new plastic religion has been instituted, where the sacrament — the baptism — is to be injected annually with unknown chemicals, the badge of faith is a face covering of synthetic cloth and the creed is to hate and ridicule and oppress those who resist the injection and the mask. Adherents to the creed glare with empty eyes at the heretics as they recite the latest prophecies and dictates of their high priests.

Important institutions that once safeguarded truth — and thereby freedom — are now openly perverted beyond recognition. Journalism, where facts were once sacred whether someone liked them or not, is now a despicable joke.

Science, where empirical reality was once the crowning good no matter who was inconvenienced or who lost money or face, is now as phony as a spam call about your car’s extended warranty. It warns us stridently that we must bow down to tyranny to hold off changes in our planet’s climate, even while telling us that the gender baked into our very chromosomes is something we can pervert on a whim, and that everyone must indulge our perversion or risk ostracism or literal imprisonment.

Complain aloud about these things — defend real science or real journalism, or blaspheme the Pfizer God — and you are a dangerous subversive. Actually pick up a flag and gather at your leaders’ doorstep and you’re a terrorist in need of tear gas, detention or worse.

Quote a piece of scriptural truth in public and … get this … it is YOU who are the tyrant who must be brought to heel.

With bullies, who abuse and oppress and threaten you with increasing regularity every day, the decision is simple. You can allow them to continue, or you can respond with a decisive, all-or-nothing show of courage and muscle.

Those are really the only two options.

The first option amounts to handing over your life, your liberty and your happiness to their tender care. Abuse, oppression and threats for the rest of your days, only increasing. A boot stamping on a human face for the rest of eternity, as Orwell described it.

The second option might well bring pain or worse, but it will bring results. It might even reveal the bully as the cringing, paper-tiger coward he really is, and restore something like the life God means for you: one of freedom, family, home, friends, prosperity, happiness free from the oppression of cruel, stupid, perverted and malignant human beings who can only live with us kneeling at their feet. People who, instead of believing in God, believe they *are* God.

It’s actually not a difficult choice to make.