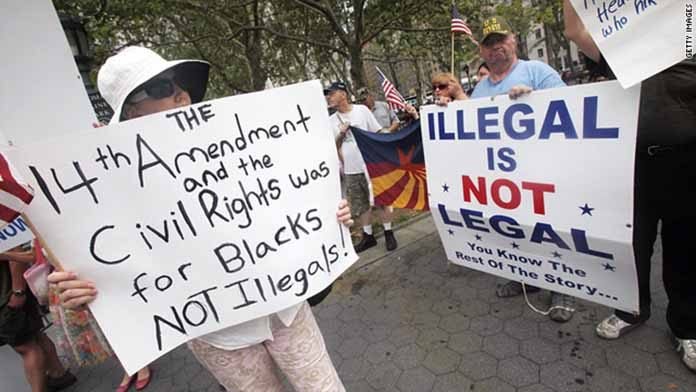 It is now unlawful in New York City for residents to call someone an “illegal alien,” even if that person isan illegal alien.

New York City’s Commission on Human Rights announced last Thursday that residents could face up to $250,000 in fines if they use terms such as “illegal alien…with intent to demean, humiliate or harass a person.”

Fines can also be levied against a person for threatening to call ICE on an illegal immigrant.

“Threatening to call ICE when motivated by discrimination, derogatory use of the term ‘illegal alien,’ and discrimination based on limited English proficiency are unlawful discriminatory treatment under the NYC Human Rights Law,” the announcement read.

The Commission, however, does not define or explain what constitutes a “discriminatory motive.”

“Fines of up to $250,000 can be assessed for each act of willful discrimination, and damages are available to complainants,” the city said.

This latest action by the Commission follows on the heels of a previous enacted ban on employers and landlords from using gender pronouns other than those preferred by employees and tenants.  Those violations also carried a $250,000 fine if the offenders were guilty of “willful, wanton, or malicious conduct.”

Sen. Ted Cruz (R-TX) pointed out that the term “illegal alien” is used under federal law. Former Attorney General Jeff Sessions directed his Justice Department NOT to use any other term than “illegal alien.”

The Human Rights directive said the new law also includes harassing people over their accents or grasp of English.

The Commission gave a hypothetical violation of its new directive: “A hotel prohibits its housekeepers from speaking Spanish while cleaning because it would ‘offend’ hotel guests or make them uncomfortable.”

“In the face of increasingly hostile national rhetoric, we will do everything in our power to make sure our treasured immigrant communities are able to live with dignity and respect, free of harassment and bias,” said Carmelyn Malalis, the agency’s commissioner.