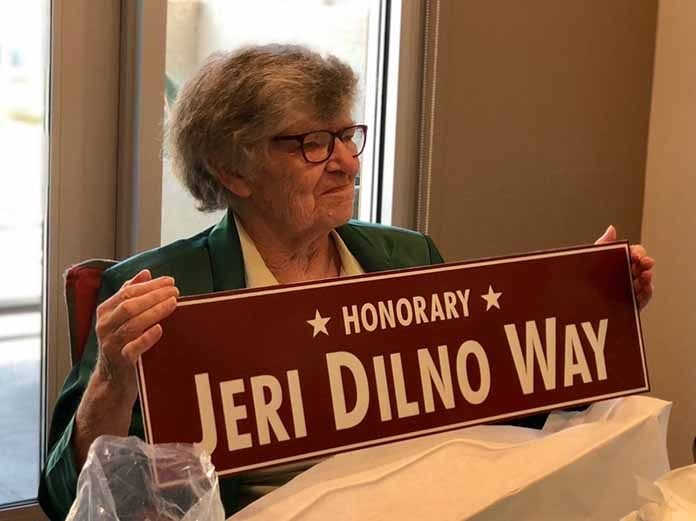 The street re-naming ceremony was held last Saturday at the corner of Howard Avenue and Texas Street, which also coincided with Dilno’s 83rd birthday.

Dilno received public acclaim in 1977 when she falsely claimed 10.5% of all men were homosexual and 7.5% of women were lesbians. She would later take over the presidency of the San Diego Democratic Central Committee in the late 1980s.

She was a leader in the opposition to California’s Prop. 6 in 1978 that would have forbidden gays and lesbians from teaching in public schools. The proposition, known as the Briggs Initiative, was rejected by a majority of voters by a margin of 58.4% to 41.6%.

Dilno claims gays and lesbians have been able to place themselves into influential positions of power by appearing to be conservatives.

“The [gay and lesbian civil rights] movement, overall, has become more conservative,” says Dilno. “When you can’t get in and you have to jump around outside and scream and holler for someone to open the door, it’s a lot different than when the door’s open and you can walk right in and you’ve got your friends sitting at the table.”

Dilno, who was once a Republican, was also known for convincing CBS to change the script of a popular television series that was about to feature an episode of a gay male teacher raping one of his male students.

Though Dilno never publicly named the particular CBS show in question, she said, “”They had all kinds of inaccuracies and stereotypes in this script,” she said. “We got a meeting with the station manager to tell him how upset we were going to be if this episode ran, and we said, You know there’s these radical elements in the community that are going to be marching the streets.”

Dilno was one of the founding organizers of the first San Diego Pride Parade and was also the executive director of the San Diego LGBT Community Center from 1975 to 1977.