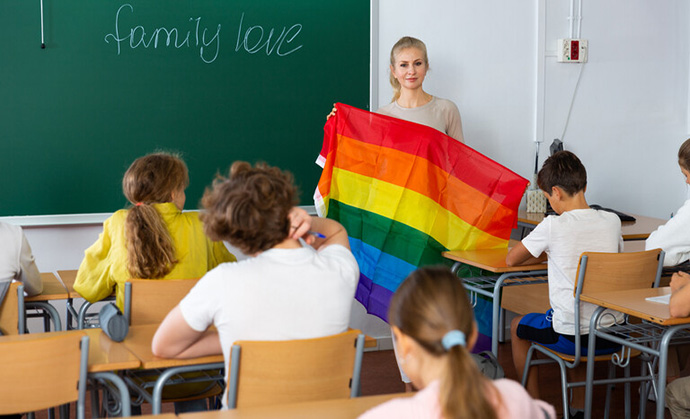 How about a teacher proclaiming support for certain sexual practices in a school classroom with a big, colorful flag? Sound legit?

Or does it sound like a homosexual grooming kids who are in school to learn about completely unrelated matters?

A school board in Osawatomie, Kan. is trying to figure that one out. The Board of Education there is debating whether a rainbow gay pride flag is considered political, which would put it in violation of district policy.

FOX 4 reported that in a special meeting held April 20 to discuss the issue, a board member said it was a student who mentioned that a rainbow pride flag was displayed in a classroom, violating a school policy known by the code “GBRK.” That policy states that staff members are not allowed to use school time, property or equipment to further the interests of a political party, campaign or issue.

“I don’t think it’s a political issue,” board member D.J. Needham ventured, at the meeting.

Not everyone on the board agreed that waving a flag is not political.

“The motion is that district administration will enforce board policy GBRK with the understanding that an object will be removed from the classroom if the object does not meet the curriculum of the class and that the specific item in question is to be included,” said Superintendent Justin Burchett.

The board plans on seeking legal counsel to figure out whether it should consider an LGBTQ pride flag as a political object, whether it creates a distraction and how to proceed with getting rid of it.

One parent who preferred to remain anonymous said she doesn’t think the flag belongs in the classroom. Others said every poster or symbol that might offend someone in a classroom could be affected.

“Is a poster of Albert Einstein political or a picture of mockingbird for a creative writing class?’” said another Osawatomie resident, Shawn Pavone. “What is political? What’s the fine line?”

Between Einstein, or a bird, and the homosexual flag? It’s not that fine a line. It depends upon why the symbol was put up.