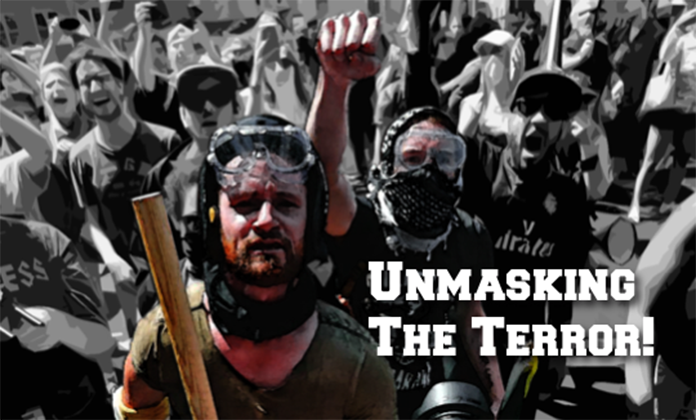 Christian Action Network has released an expose on this radical group who once opposed the Nazis, but now has become a brutal, thuggish catch-all for leftist rage and malice: Antifa.

If the name Antifa is unfamiliar to you, then it is time to learn about an menacing and increasingly dangerous movement that is throwing bricks, punches and gasoline bombs right here in the United States of America.

Get a printed copy mailed to you: “Antifa-Domestict Terrorists” report

Our eight-page newsletter, Antifa – Domestic Terrorists,details the history, objectives and violence of Antifa members in their efforts to shut down conservative opponents and suppress free speech through intimidation, threats, vandalism and outright physical violence. This newsletter will soon be sent to congressional offices, political insiders, law enforcement officials and concerned citizens across the United States.

One cannot watch news coverage in 2019 without noticing the increasing hysteria of the political left in response to President Trump. His every achievement seems to ratchet up their hate; every success makes them more choked with fury; every flimsy false scandal drives them closer to actual lawlessness and open revolt against civil society.

At the crest of this growing wave are the helmeted and black-clad members of Antifa. They beat a conservative journalist senseless in Oregon. They ran wild, smashed windows and burned a car in Washington D.C. on President Trump’s inauguration day. They have blocked commuters on highways in major American cities. They vandalized, trashed and browbeat a California university into canceling a prominent conservative’s lecture.

And, finally, they have been linked to murder. The man who shot up a bar in Dayton, Ohio in August of 2019, killing nine people, proclaimed “I want socialism,” and was a supporter Bernie Sanders, Elizabeth Warren … and Antifa.

As political tensions continue to mount in the U.S.A. and the political left’s gloves continue to come off, look for the exposed fist to be that of Antifa. Read more about them in Antifa – Domestic Terrorists, and learn about how you,if you are an evangelical Christian or conservative willing to exercise your right to free speech, are their principal, declared target.