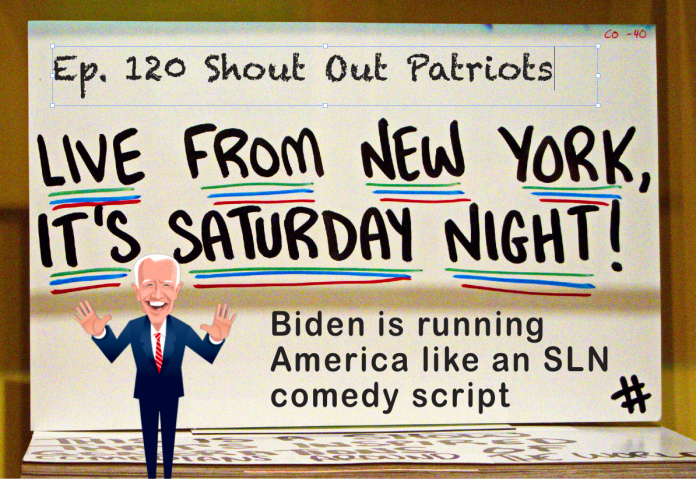 Have you ever found yourself laughing at the news, even if begrudgingly?

Lately, reading the news is more like reading a bad Saturday Night Live comedy script. But since laughter is the best medicine, a few chuckles here and there might help us survive the daily dose of deplorably depressing news.

In this episode of Shout Out Patriots, we are bringing attention to some of the dumbest, comical and cringeworthy statements and actions made by world leaders during the past couple of weeks.

The fact that NO police officer died during the riots is hilarious enough, but five?

Of course, there’s nothing funny about police officers dying in the line of duty. But the only deaths that day were two people who died of natural causes (heart conditions), one who perished after a drug overdose, and another after a policeman shot and killed a protester.

But nonsense also abounds with another head of state, Vladimir Putin.

So, does Putin know something about the spread of Covid the rest of the world doesn’t? That a face mask and social distancing are only necessary unless five beautiful women are surrounding you.

Why didn’t Fauci tell us?

Not to be outdone by Biden or Putin, the United Nations added some twaddle of its own this month.

The world body instructed its staff not to use “war” or “invasion” when describing the Ukrainian conflict. The UN warned that such words might create a “reputational risk” to the organization.

Oh, come on. How can the UN still be worried about a “reputational risk” after this 2015 headline?

Okay. We can laugh. We can cry. We can scowl. We can mock.

But how do we understand this nonsense?

The Biden administration updated its ready.gov page to instruct Americans on what to do in case of a nuclear war.

“Stay inside for 24 hours unless local authorities provide other instructions. Continue to practice social distancing by wearing a mask and by keeping a distance of at least six feet between yourself and people who not part of your household.”

Even Biden can’t believe that social distancing while wearing a face mask indoors is sufficient to protect us from a thermal nuclear fireball, does he?

Of course not, at least we hope.

Perhaps Putin’s recommendation that you also surround yourself with five beautiful female flight attendants will help. Why not? If you got to go anyway.