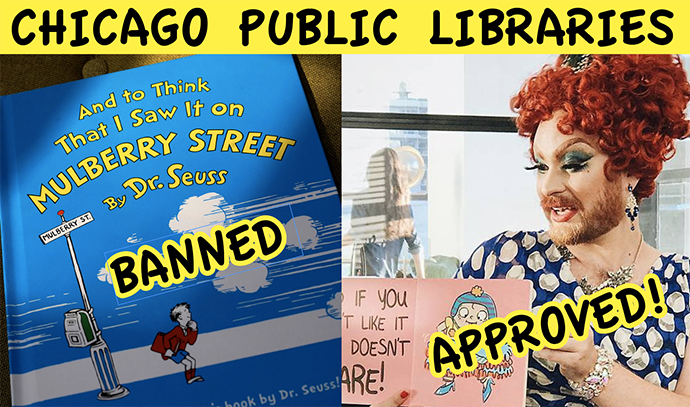 If the folks at the Chicago Public Library don’t like it, then you’re not allowed to borrow it.

Officials at that institution will temporarily remove several Dr. Seuss books that they accuse of having racist, “insensitive” imagery from the shelves as they weigh a long-term censorship plan for the collection, a spokesperson was quoted saying by the Chicago Sun Times.

Last week, Dr. Seuss Enterprises announced it would stop publishing six books including And to Think That I Saw It on Mulberry Stree” and If I Ran the Zoo, telling the Associated Press that “these books portray people in ways that are hurtful and wrong.”

Why it took until 2021 to see this was unclear.

“And to Think That I Saw It on Mulberry Street” depicts an Asian person wearing a conical hat and holding chopsticks while eating from a bowl. “If I Ran the Zoo” includes images of two barefoot African men wearing grass skirts with their hair tied on top of their heads. The other books are “McElligot’s Pool,” “On Beyond Zebra!” “Scrambled Eggs Super!” and “The Cat’s Quizzer.”

Chicago Public Library officials said in a statement that they are “deeply committed” to fostering a passion for reading, which is why the system will withhold copies of the Dr. Seuss books from the public once they’re all returned. All six books are currently checked out, with more people in line to borrow them after that.