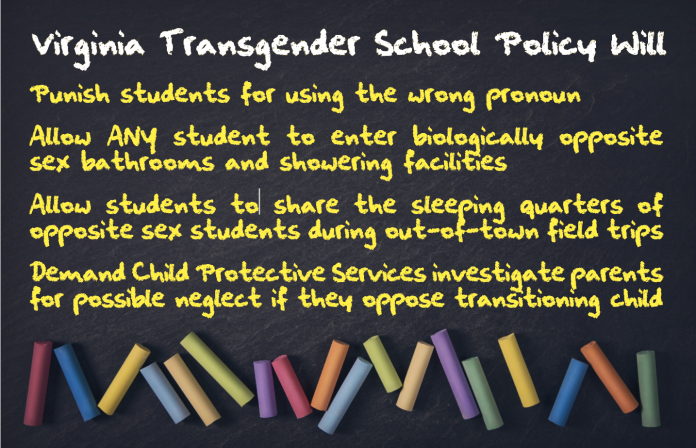 On Friday, Christian Action Network (CAN) and Founding Freedoms Law Center (FFLC) filed a Notice of Appeal in opposition to Virginia’s recently published “Model Policies for the Treatment of Transgender Students in Virginia’s Public Schools.”

The Lynchburg-based CAN was the first to file, meaning the case is likely to be heard in the City of Lynchburg. In all probability, CAN’s appeal will be consolidated with the legal complaints of the Richmond-based FFLC.

During the past several months, CAN and FFLC have warned the Virginia Department of Education that ‘Model Policies’ infringe on federal and state constitutional rights of parents, students and school staff, as well as violating other state laws.

“Many of these guidelines offer no practices that are either ‘evidence-based’ or ‘best’ for both nondiscrimination and for protecting students with normal sexuality,” said CAN Chairman and attorney, David Carroll.

“Instead, they demand that everyone accept an extreme totalitarian alternate reality in which a person’s sex is merely a label given at birth rather than biological science or a gift from God, and in which students are punished for failing to use a preferred, often unpronounceable, pronoun rather than the normal he or she.

“The VDOE’s proposed model policies for transgender students reject the sensibilities, religious beliefs, or safety of the majority student population,” Carroll said. “The model policies are an attempt to transform the culture by propagandizing and intimidating students against their religion and cultural modesty. It is simply wrong in every respect and they violate the various constitutional and state laws.”

At issue for FFLC (which CAN concurs), are policies that:

“Allowing a minor, deemed by state laws incapable of making legally binding decisions because of a lack of capacity, to make a decision concerning gender reflected on school records is again a violation of constitutionally protected parental rights,” FFLC attorney James Davids posted to Virginia’s public comment forum regarding the proposed guidelines.

“Withholding these documents is a violation of Virginia Code § 20-124.6, which states that a parent shall not be denied access to his/her child’s academic record,” Davids wrote.

CAN president Martin Mawyer said, “These ‘Model Policies’ fail at every level to respect or secure the rights, modesty and safety of the vast majority of Virginia’s public-school students.

“The fact that no fewer than four LGBT groups are referenced as contributors to these guidelines without a single traditionalist group being represented, is evidence of itself that Virginia’s Department of Education had no interest in even hearing about those rights, modesty and safety issues.”

“Anyone reading through the ‘Model Policies’ will quickly learn that the guidelines are less about protecting the rights of transgender students than they are about punishing, expelling and humiliating any traditionalist who still believes in biological science and God,” Mawyer said.

“If the courts uphold these unscientific and morally-flawed guidelines, our lawsuit will likely only be the first in a series of avoidable litigation that could eventually bury Virginia’s public schools,” Mawyer said.