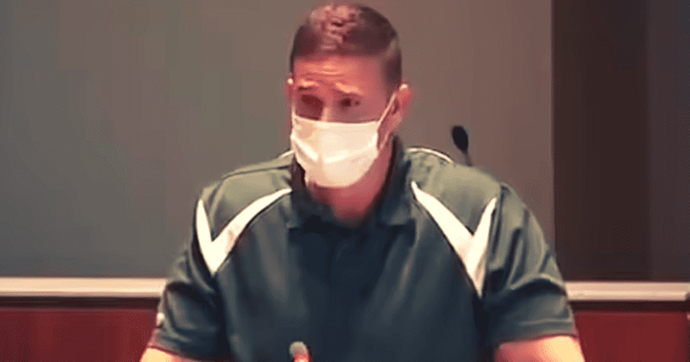 UPDATE 6.8.21: A judge has reinstated Byron Cross as a teacher at Leesburg Elementary school.

On June 8, Twelfth Circuit Judge James E. Plowman wrote, “The Court finds that in balancing all of the factors and weighing the facts presented, the Plaintiff’s interest in expressing his First Amendment speech outweigh the Defendants interest in restricting the same.”

School officials said in a statement, “Many students and parents at Leesburg Elementary have expressed fear, hurt and disappointment about coming to school.”

A Loudoun County, VA school teacher is suing after being suspended for making public comments that he would not address transgender students by their preferred pronouns.

At a May 25 school board meeting, gym teacher Byron Tanner Cross announced that he would not abide by a school policy requiring teachers to address transgender students by their preferred pronouns.

The Loudoun County school policy is similar to one being proposed by the state’s “Model Policies” for the treatment of transgender students that is scheduled for the 2021-2022 school year. Christian Action Network is suing the Virginia Department of Education over those unconstitutional mandates.

Following Mr. Cross’s announcement, he was immediately suspended by Leesburg Elementary School principal, Shawn Lacey, with no explanation given.

During his testimony, Mr. Cross said, “I love all of my students but I will never lie to them regardless of the consequences.”

Mr. Cross argued that though he is a teacher, “I serve God first and I will not affirm that a biological boy can be a girl and vice versa because it’s against my religion, it’s lying to my child and it’s sinning against our God.”

Mr. Cross is not the first teacher at a publicly-funded teaching institute to refuse to address transgender students with pronouns other than with those associated with their biological birth gender.

This past March, the 6th Circuit Court of Appeals upheld the right of professor Nicholas Meriweather to refuse a requirement by the Shawnee State University to address transgender students with their preferred pronouns.

“This is coercion…and we know the Free Excercise Clause protects against both direct and indirect coercion,” Thapar wrote.

Cross’s attorney, Tyson Langhofer of Alliance Defending Freedom (ADF), said, “Public schools have no business compelling teachers to express ideological beliefs that they don’t hold, but it’s beyond the pale to suspend someone simply for respectfully providing their opinion at a public meeting, which is what such meetings are designed for.”

“This isn’t just about a pronoun; this is about endorsing an ideology,” Langhofer added.

“The school favors certain beliefs, and it wants to force Tanner to cry uncle and endorse them as well. That’s neither legal nor constitutional, and neither was the school’s move to place Tanner on leave,” he said.

Mr. Cross told the school board that he was not trying to hurt transgender students, but was “speaking out of love for those who suffer with gender dysphoria.”

“It’s very clear that Mr. Cross spoke based on his religious conviction, and he is being discriminated for that,” Ryan Bangert, Senior Counsel for ADF, said.