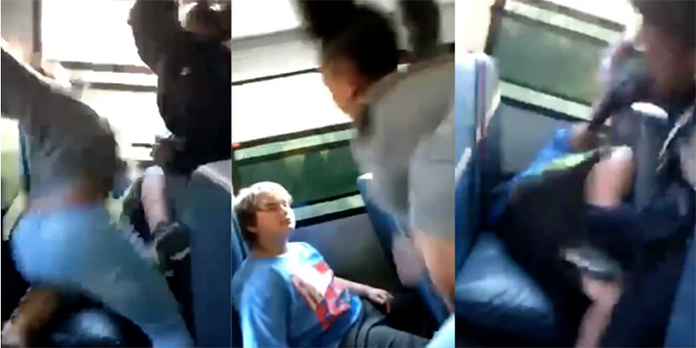 A North Florida school superintendent maintains that an attack by several students on a boy on a school bus was not motivated by the boy’s wearing a hat supporting President Trump, but the boy’s mother contends otherwise.

Five students were charged last week after a video emerged of the boy being attacked on a school bus, allegedly because he’d previously worn a Make America Great Again hat.

The charges come three weeks after the initial attack on Nov. 21 that sent the 14-year-old, Tyler, to the hospital with bruises on his head, reports Dailymail.com.

Superintendent Rex L. Mitchell shared a press release on Friday addressing the incident, and said the school district has investigated, disciplined the students involved and turned information over to the Sheriff’s office.

Although social media latched onto the implication that the beating happened because Tyler wore a MAGA hat, Mitchell contends that is not the case.

‘It is implied in the post that the altercation occurred because one of the students involved was wearing a political hat showing support for President Trump. There was no evidence found during the investigation that indicated the student was wearing of such apparel on a prior occasion motivated the incident,’ the statement reads.

The school district reviewed the bus video to view not only the incident, but the events leading up to it and following after.

A woman by the name of Melissa Griffin organized a GoFundMe on Friday for her son, Tyler. She said that when Tyler was examined after the school, nurses found older bruising along with the new injuries. “He didn’t tell us about the bullying, but they took it to a new level yesterday and we are just now learning what he was going through,” she said